This article appeared in the Fife Courier and the Central Fife Times on 10th October, 2013.

Over 500 people attended the Strongman event which included truck pulling, giant tyre flipping and “Ballingry Boulders” – the organisers’ version of “Atlas Stones”. There were also over 40 stalls ranging from jewellery, crafts, and “Kick-Ass” American cookies. British and Scottish Arnold’s Strongest Man, Stephen Cherrie, made a guest appearance too. 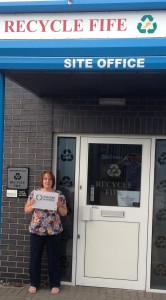 This article was published in the Fife & Kinross Extra and the Central Fife Times on 8th August, 2013.

A Lochgelly based social enterprise which has been providing recycling and skip hire services to Fife for nearly a decade has recently achieved Investors in People accreditation. Recycle Fife, founded nearly 10 years ago by Frankie Hodge and Jackie Dunsmuir, has achieved the prestigious award which they hope will help them with their continued development and growth.

To date, Recycle Fife has created 144 jobs, of which at least 70% have been for people who are classed as furthest from the labour market. The social enterprise is not only committed to diverting waste from landfill but also creating sustainable employment and training opportunities in the local area.

LOCHGELLY High School’s Employability Initiative is making a real impact on both pupils and the local business community.

The school regarded itself as extremely fortunate to be visited by two local business leaders, John Penman from Fifab, and Frankie Hodge, from Lochgelly social enterprise, Recycle Fife, who took time out from their busy schedules to deliver presentations to senior year pupils.